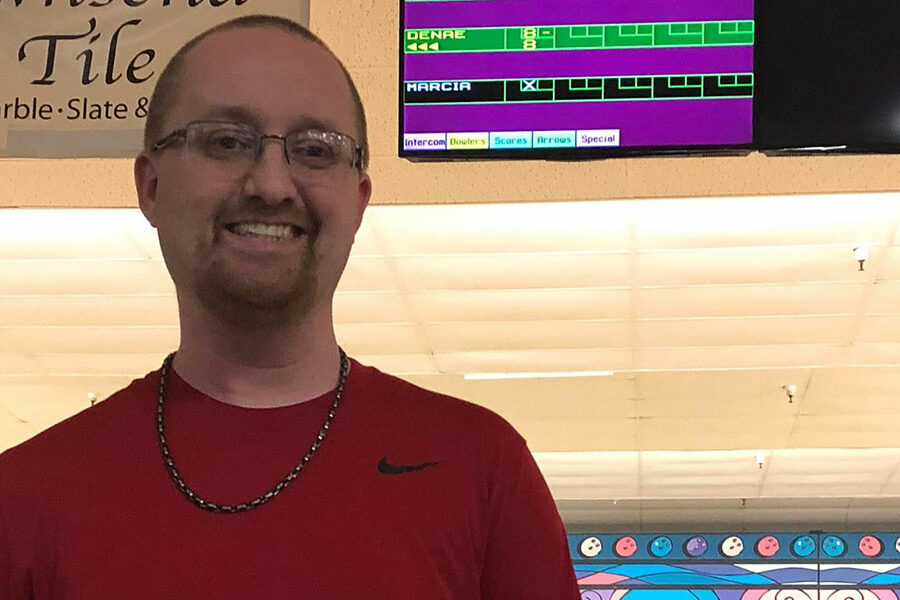 Denae Du Charme has a tattoo. It is a simple one. No skulls or fire or animal totems. In the center there is a red ribbon with a loop. Above the ribbon it says Stroke and below the ribbon, Survivor.  Across the middle of the tattoo is a date, 4-2-2013, and written on the ribbon is Warrior, which is a fair assessment of anyone who is engaged in the battle to reclaim their life from the physical, emotional and psychological ravages of a stroke.

In his 35 years prior to April 2, 2013 Denae had enjoyed a reasonably normal life. He had a fulfilling career in retail grocery management, a compelling personal life and a passion for bowling. And while it could be said that Denae was successful in all aspects of life he achieved significant recognition for his bowling skills. Denae’s average score was 220.  The highest score attainable in a single game of bowling is 300. That’s known as a perfect game.  Before the stroke Denae had bowled a 297, a 298, three 299’s and eight 300’s.

Strokes are not gentlemanly. They don’t confront you face to face and say “Put up your dukes”. They sneak up behind you and bash you in the head with a crowbar. That’s what happened to Denae. The results of this attack left him in a medically induced coma for 3 days, after which he was shuttled between Wisconsin hospitals for another 2 ½ months. The first week following the stroke he was unable to talk. Since he couldn’t swallow he had a breathing tube through his nose. And while he benefited from over a year of speech, occupational and physical therapy, the effects of the stroke have left him with only 50% of his feeling on the entire right side of his body. Although he can walk he can’t grab or grip anything with his right hand. His arm will move up and down but won’t straighten. Additionally he suffers from moderate to mild aphasia as well as diminished sight in his left eye.

The Merriam-Webster Dictionary broadly defines Warrior as: “a person engaged in some struggle or conflict”. During the first few weeks after the stroke Denae was in disbelief. As reality crept in his warrior attitude enabled him to quickly process through the grief stages associated with his loss and fully accept the new paradigm of life as a stroke survivor.  Denae had 2 great reasons to push forward. “When I had my stroke I had 2 young children. Aiden was 5 and Addison was 2. I wanted to push myself to get better for them. I went for it and gave it my all.”

Not only was he able to look to his children for motivation but Denae is quick to point out  that he got support from a broad community of caring people. “I had support from my family, my work family, and the community. A Caringbridge site was set up. A benefit was held to help my family and it raised $35,000.” When asked if there was anything extraordinary about him that enables him to cope with the circumstances of surviving a stroke, he replied: “Just the strength that I get from the people who have my back.”  In terms of support there seems to have been a spiritual component for Denae as well. “I watched as others around me got mad at God. I never did. Eventually, it drew me closer to Him.” Denae also recognizes exercise as an important component to his recovery. During the first year after the stroke he exercised at his physical therapy sessions and walked. Now he is lifting weights, doing yoga, walking and he bowls twice a week.

The same winning attitude that brought Denae success in the sport of bowling has served him well in his battle to rebuild his life from the bombed out wreckage left by the stroke.  Since the stroke he has gotten his driver’s license back, participated in online dating, re-married, gone sailing, taken a ride in a helicopter, gotten his only tattoo, ridden an escalator, jumped in a jump park and moved 1,600 miles from his hometown of LaCrosse WI.

And, about that bowling; Denae remains as passionate as ever. The stroke forced him to switch to his left hand. After a rocky start (bowling a score of 2 for his first game) Denae currently carries an average of 116 and has bowled a high game of 165.

Clearly, you don’t have to be a stroke survivor to gain inspiration from this warrior. Never the less, for those who are struggling through the battles of life after stroke Denae’s story is not only an inspiration but offers unique insight into the process that has made him a winner in his battle.

Denae is our first sponsored athlete!
Stroke Survivors CAN!