John Lummis: Bring It On 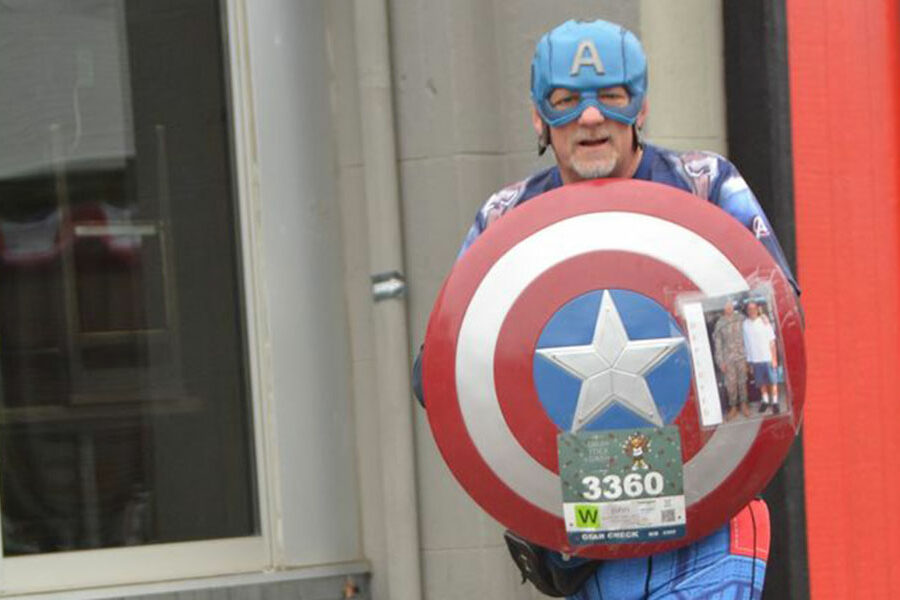 Eleven years as a volunteer firefighter had taught him to think critically in emergency situations. Fearing unconsciousness John typed a note on his computer alerting anyone who might find him passed out to his assessment of his situation. John was rushed to the hospital where they determined that he had suffered an ischemic stroke.  After 5 days in the hospital he was released to rehab. Rehab was a revelation that immediately set the tone of John’s recovery.

As a firefighter John had responded to plenty of stroke related emergencies. But, he was called in after the stroke had occurred. He only saw the aftermath of a stroke. “I thought when you had a stroke what happened was that you go home, played with the remote, watched TV for a couple of years then passed away. I didn’t know I could rehab.”  John completed a 24 day rehab program in 18 days. To John going through rehab was like training for a new sport.  He was disappointed when it ended and wanted more.

John, 50 years old at the time of the stroke, December 26, 2013, was quite active earlier in life. As a runner he had participated in events like the 13.1 mile Mini Marathon held during the Indianapolis 500 festivities. He had also coached his kids in soccer until they were participating at high school level.  Additionally, he was required to maintain a high degree of fitness as a firefighter.  Even though John had slowed down a bit after his soccer coaching duties he hadn’t lost his competitive fire.  Graduating from the initial rehab program was not the end of John’s recovery. When insurance ran out and required him to cease sessions with his initial rehab trainer John came up with his own routines, such as placing weights on his effected hand and using an air hockey table to mimic the actions of sophisticated rehab facility equipment.

Currently John has recovered about 75% use of his arm and 80% of his leg. He routinely participates in walking events and has moved from dead last to mid pack. He is capable of sustained 15 minute miles in these events. However, perhaps his most impressive physical feat is participating in Indianapolis’ Bop To The Top event. Participants climb the stairs to the top of the 36 story One America Tower. That amounts to grinding up 720 stairs. John does it in under 12 minutes and last year did it 3 times, back to back to back while wearing a 40 pound weighted vest. .  John is easy to spot at these events since he typically wears superhero regalia, such as his Iron Man costume.

John has proven to be as resilient psychologically as he has been physiologically throughout his recovery. He doesn’t recall grieving his loss much and never got involved in support groups. He claims that when he learned that it is possible to recover from a stroke it was all he needed to instill the hope and positive attitude that has carried him through and inspires him day to day.

Still, there is one group that has been very instrumental in his recovery process. John volunteers at the University of Indianapolis, IUPUI and the Rehabilitation Hospital of Indiana in a variety of ways. He has been involved in a study that examined the effects of high intensity training for rehabbing stroke survivors. This study pushed participants much harder that what is prescribed in present rehabilitation programs. John loved it. He was also one of the subjects in an electromagnetic brain stimulation study and is in an ongoing program that brings in student therapists who then have the opportunity to evaluate and work with actual stroke survivors, which has proven to be much more beneficial than working with actors, as was once the practice.

John is highly motivated to get the word out that stroke survivors can benefit from rehab and encourages any survivor to invest the time and energy into rehabilitation. John is very active in a Facebook site entitled the “Stroke Sweat Squad” where stroke survivors are encouraged to share their stories.  John offers encouragement and is quick to provide insights gained from his experience.

John’s message to stroke survivors is that to varying degrees they “can come out of this, but they have to work at it – hard.” His advice is “Listen to your therapist and be honest with yourself about what you are doing.”

Having been greatly inspired by our own Kevin Rhinehart, John’s next challenge is to learn to swim so he can start participating in triathlon events and maybe, one day, even pass Kevin in a race. “Bring it on, John”, because you’re living proof that “Stroke Survivors CAN!”