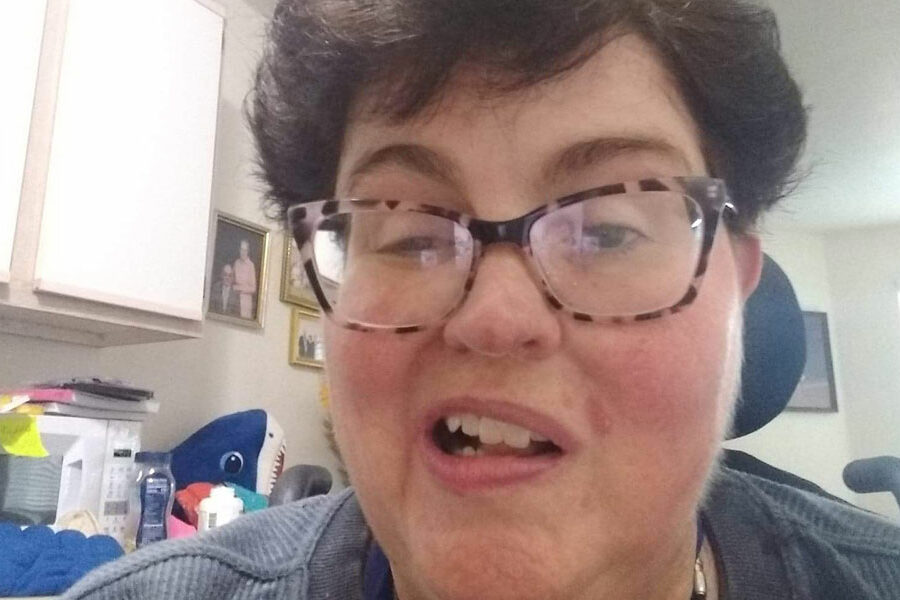 While it can easily be argued that the metaphor “hit like a ton of bricks” may be a little old and over worked, it is nevertheless, an apt description of the way strokes can suddenly and powerfully devastate a life. And, if it is accurate to say that most stroke survivors felt like they were hit by a ton of bricks when the stroke came crashing down on them, then Tonia Medrick must have felt as if she had been hit by 3 tons of bricks. In the short span of 3 days Tonia was smitten by 3 strokes.

For Tonia, July 12, 2016 started out like any other day for the 45-year-old bank officer. She and a team of co-workers were out of town visiting bank clients. After a routine lunch they were getting geared up for a productive afternoon. Tonia did not notice anything unusual as they ascended a flight of stairs but at the top her companions thought her face looked a little odd. And she was not making sense when she spoke. Paramedics were called and when they were examining Tonia, they asked her to raise her left arm. She lifted her right one.

On the life flight to the hospital no one said anything to Tonia about what they thought was the matter with her.She remained unconvinced that there was any kind of medical issue. At the hospital she was attended to but still not informed of her condition. They administered a clot buster and informed her that they needed to go in through her groin to remove a brain clot. When the anesthesiologist asked her if it was ok for him to put her to sleep the feisty former attorney informed him that it would probably be better for everyone in the room if he put her to sleep.

As the surgery team was removing the clot, they discovered that she had a dissection in her carotid artery.While the surgical team was working on repairing these issues Tonia suffered a second stroke due to another clot while she was on the operating table. They were able remove the second clot and put a stint in the dissected artery. Tonia survived 2 ischemic strokes in the same day.

After a couple of days in the hospital Tonia was sent home and given a prescription for Plavix and told to take aspirin as well. She was able to walk but noticed she was not able to pet her dog with her left hand. Tonia had gone to her family’s house to recover from her ordeal. When she needed to go to the bathroom her sister insisted on being at hand to assist her. That was a fortunate decision. When she attempted to return to her chair Tonia collapsed. Her sister urgently instructed Tonia’s young son to call 911. At the hospital it was discovered that Tonia had suffered another brain hemorrhage, this time in the basil ganglia and internal capsule.

Tonia does not remember much about the month she spent in the hospital after her third stroke. She remembers how the bed alarms would go off when her son climbed on the bed to be close to her. She vaguely remembers seeing cousins who had traveled from out of town to visit because they had been told that she might not make it. But Tonia did make it.

She started remembering things a little better after she was transferred to the rehab hospital. She could not walk but her immediate concern was that she could neither swallow nor talk. Her greatest accomplishment of the month she spent in the rehab hospital was regaining her speech and ability to swallow. It took a year for her to begin walking short distances.

Tonia is now walking with the aid of a walker, although mostly relies on a wheelchair for mobility.  She nowcanspeak very well and can swallow. Other than occasional bouts with depression Tonia is in good shape cognitively. She has also been able to gain some independence by moving from her family’s home into a retirement community where aides who help her with the things she is still unable to do.

Physical Therapy is still an important part of her routine when her insurance allows it. She still likes working with her counselor to cope with the realities of her situation. Tonia hopes to start occupational therapy soon. The thing that has kept and continues to keep Tonia going during this battle is her son.

As a word of encouragement to other stroke survivors Tonia wants them to erase “can’t” from their vocabulary. As she puts it “Never say can’t. It’s ok to say you’re not able to do something right now but never say you can’t. Physically I’m a mess. But what you’re seeing isn’t the whole story. I’ve come a long way. You have to hang on to the positives”.

That is why Tonia is such a great example of how “Stroke Survivors CAN!”.

If this blog touches you, won’t to please consider making a donation to Stroke Survivors CAN!, a nonprofit devoted to helping stroke survivors find hope and empowerment. Your contribution helps this site possible and sponsors other stroke survivors who wish to pursue non-contact athletics!